What is Nero Portoro? The finest black marble in the world

What is Nero Portoro marble?

The Nero Portoro marble quarry is based in Portovenere which is an island in La Spezia province, Liguria Region, northern Italy. Portoro is an Italian black marble which formed approximately 200 million years ago, its extraction first began at the time of the Roman Empire and the marble was discovered by the sculptor Domenico Casella, who at the time obtained the required permission to extract the material from the senate of the Province of Genoa.

Potoro is one of the most prestigious and luxurious marble varieties available in the market, with elegant, characteristic colouring of gold and white veins beautifully contrasted across a sleek black background, it’s no surprise that this marble can be found in some of the most extravagant and distinguished places in the world. Being a very delicate and fine-grained marble, it is perfect for high-end projects and  mainly used for interior applications such as countertops, splashbacks, kitchen islands, bathroom walls and flooring etc. Its beauty is enhanced by polished finishes but can also be available in a honed finish.

Due to a number of factors, one of which is the proximity of the quarries to the sea, the extraction process of Portoro is quite unique and complicated as it requires several weeks of preparation at the quarry level (bancata) before the extraction of the material can begin. This process and its potential extraction difficulties contributes to the reason there is a high cost of slabs per square meter, and not just for the prestige of the material itself.

Use of Nero Portoro marble

Portoro blocks are of medium/small size and their value is increased by their very limited availability, as a consequence of this the average slab dimension is slightly smaller than regular slabs; the thickness the blocks are cut to is always 20mm (or 3/4”).

Portoro is primarily regarded as a suitable material for many different uses such as wall coverings, floor tiles, kitchen countertops and even cladding. The polished finish is generally preferred by clients as it gives a level of shine to the finished project that adds another layer of elegance. Thanks to its unique veining patterns, striking colours, impressive appearance and high cost, this black and gold marble is frequently utilized in feature projects and statement pieces in high-end luxury residences and glamorous hotels.

Another frequent and stunning use of Portoro is as an inlay application for things like tables or benchtops as its sleek black colouring makes a perfect contrast when combined with another light coloured marble or a design object. As a matter of fact, it’s not uncommon to go into restaurants/bars/hotels in Moscow, New York and London and see this amazing black marble applied in countertops or decoration for tables, chairs and objects such as glasses or cups.

In the quarry we find different levels of this beautiful black marble (‘’bancate’’) and each level has a different quality of Portoro:

– At the top we find the tetto or “roof”, this is the layer that has to be uncovered to prepare the extraction of the materials below.

– The first layer is “scalino” or “stair/step”, which consists of a black background with thinner gold veins. This type is called Portoro “macchia fina” or “fine spot”. The level is approx 80cm – 90cm high and so the blocks extracted from this layer are of average dimension.

– The second layer is called “banco” or “bench”, this layer has the usual black background and gold veins, however these veins are slightly wider than the previous ones and are arranged in a swirling pattern. The level is roughly between 120cm – 150cm high.

– The third layer, called “sottobanco” or “under bench”, features the same black background and yellow veins however these veins are more faded and tend to be mixed with more white as well as flanked by white patches. This level is between 100cm – 120cm high.

– The fourth layer is called “zoccolo” or “hoof”, this layer is characterised by very faded veins and wide white spots. This level has a depth of approximately 200cm – 360cm.

– The final layer, called “sotto zoccolo” or “under hoof”, has the classic black background but with white veins and white spots as well as some pink. This is the most widely available type and its depth ranges between 3m and 10m.

The most precious variety are those in which the yellow/gold veins are more present. The other varieties, with veins and spots that are nearly white, are also widely requested due to, despite being less valuable, their superior compactness. 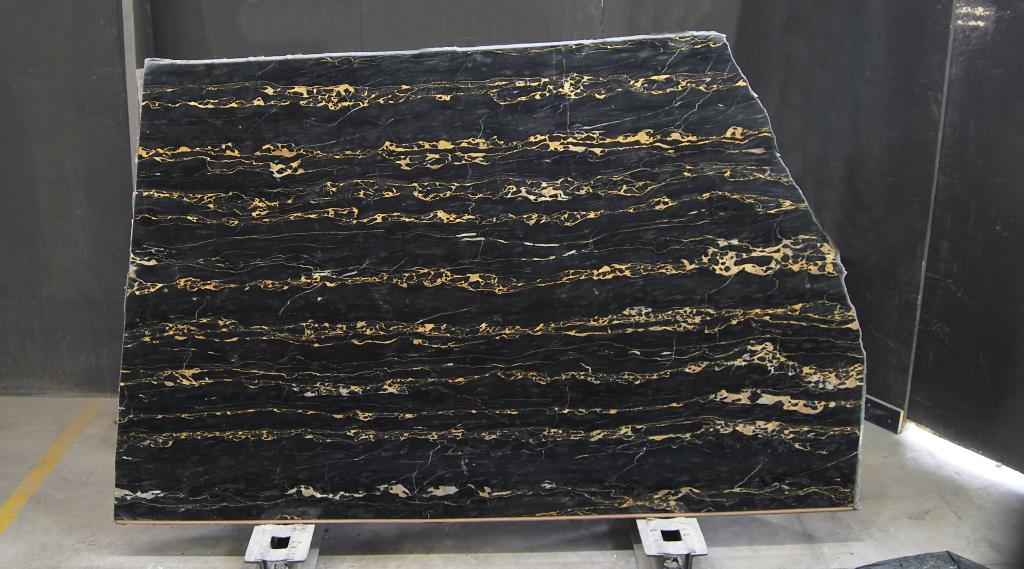 Portoro prices vary based on the type of Portoro; slabs from the most well known Portoro “macchia fina”, as well as the other layers situated at the top levels of the quarry are generally priced higher due to gold veins featuring heavily in their colouring, these slabs can range between €750 – €1500 per square meter.

Layers where the veining begins to morph into white or grey are considered less prestigious and so prices can vary between €450 – €750 per square meter.

Always keep in mind that there are other factors affecting the final price such as slab dimensions, natural imperfections, thickness, and missing corners on slabs.